On July 19, 2019, at 1:27 p.m. EDT, mission operators in the Building 21 mission operations center, or MOC, at the Johns Hopkins Applied Physics Laboratory (APL) sent a shutdown command to one of two Van Allen Probes spacecraft, known as spacecraft B.

As expected, following final de-orbit maneuvers in February of this year, the spacecraft has used its remaining propellant to keep its solar panels pointed at the Sun and is now out of fuel. Since it depends on the Sun to provide power to the instruments, and cannot orient itself to acquire power, the spacecraft has been turned off. In a stable, circular orbit around Earth, spacecraft B will – in about 15 years – re-enter the atmosphere and burn up safely, removing potential "space junk" from orbit.

The other Van Allen Probes spacecraft, spacecraft A, is expected to operate normally until early September.

Originally slated for a two-year mission, the Van Allen Probes launched on August 30, 2012 and have gathered unprecedented data on Earth's two radiation belts – named for scientist (and former APL staff member) James Van Allen – for nearly seven years. The mission has made several major discoveries about how the radiation belts operate, including data showing, for the first time, the existence of a third radiation belt.

"Seven years is a very long time," said Van Allen Probes project scientist Sasha Ukhorskiy of the Space Exploration Sector. "People who came onto this mission as students and post-docs are now well into their careers. We've raised a new generation of scientists. It's a great legacy for the Van Allen Probes."

The Van Allen Probes were the first spacecraft designed to operate and gather scientific data for many years within the belts, a region around our planet that most spacecraft and astronaut missions avoid due to the damaging hazards of the environment.

For the transmission of the final command – sent from APL's 60-foot satellite dish at the north end of campus – a group of about twenty current and former Van Allen Probes team members came to the MOC, and were joined by APL Director Ralph Semmel and SES Head Mike Ryschkewitsch.

"The launch of the Van Allen Probes was my first as director," Semmel said, "and I remember it very clearly – along with the first time that the third radiation belt temporarily came into view. The entire team should be very proud of everything that has been accomplished, because all of us at APL are very proud of you."

Ryschkewitsch, who joined APL in 2013, said: "I remember, when the Van Allen Probes launched, thinking, 'Why would someone build something to go to a place everyone avoids?' This wonderful pair of spacecraft have taught us an awful lot about the radiation belts, things we couldn't have imagined – and they've taught us a lot about operating in this region of space. I want to congratulate everyone who has been a part of this groundbreaking mission on the fantastic work they've done." 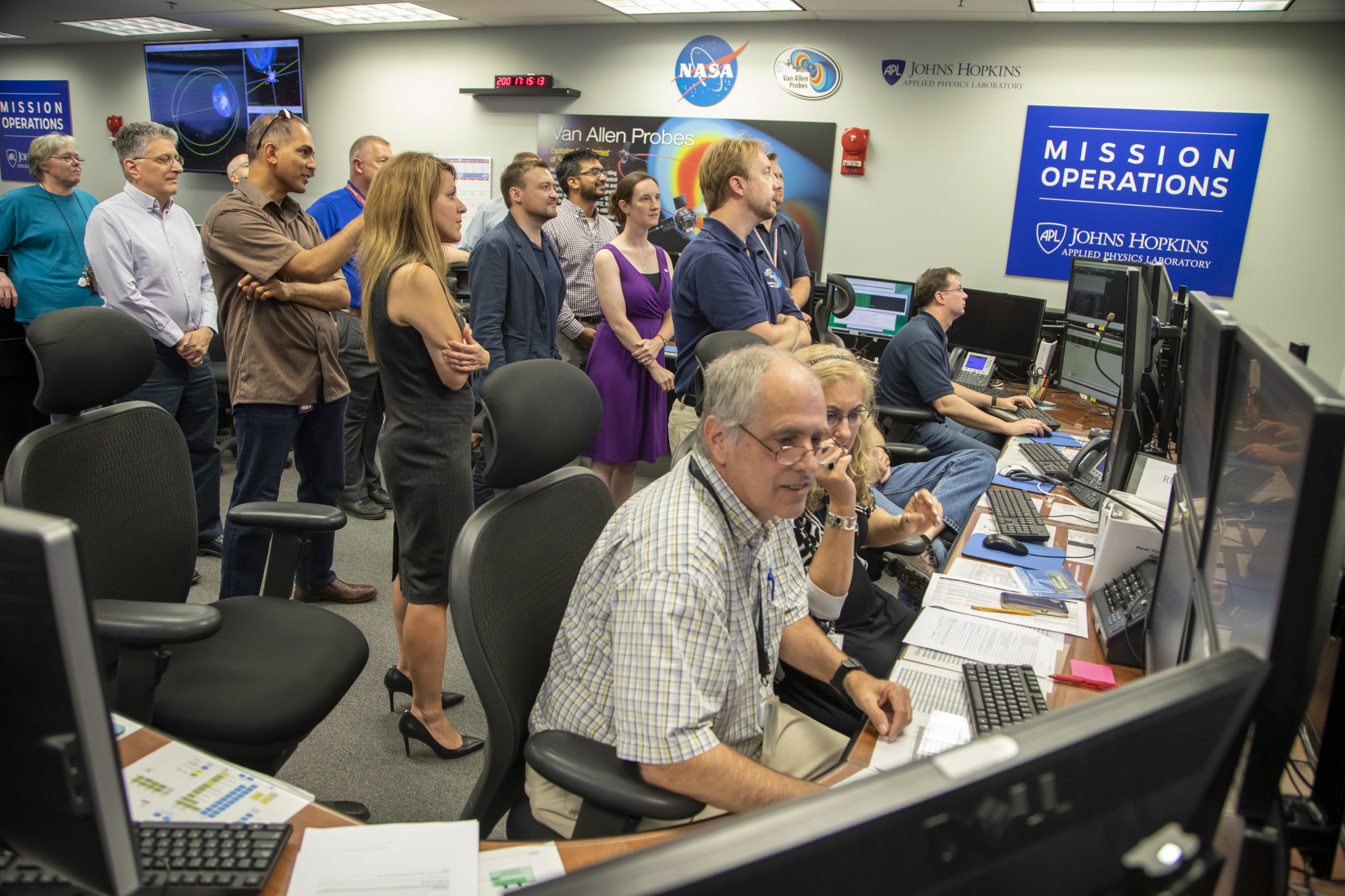 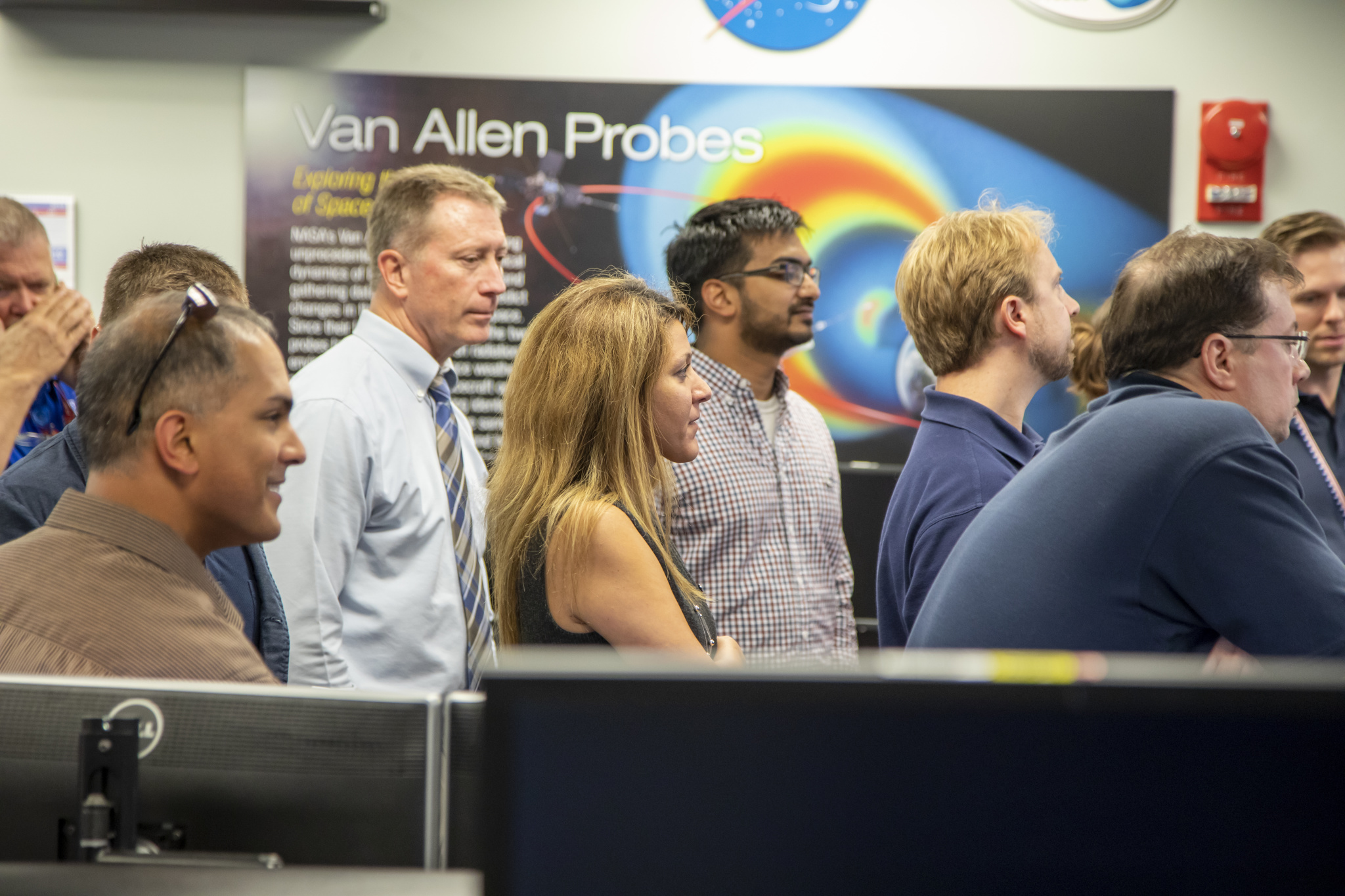